* 30% of all revenue is donated to the Auroville Forest Group

(if any of the above links doesn’t work in your country, check availability on justwatch.com) 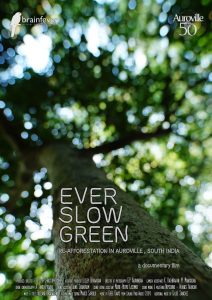 50 years ago, a unique afforestation project took root on an eroded desert plateau in Tamil Nadu, South India, when people from diverse countries came together to establish the international experimental township of Auroville.

Initially driven by the necessity to make the harsh conditions more liveable, the idealism of some early residents lead them to develop expertise in cultivating the Tropical Dry Evergreen Forest, a rare forest type native to the coastal belt of Tamil Nadu.

Today, the lush Auroville forest is an outstanding example of eco-restoration that recreates and preserves a type of tropical forest that is on the verge of extinction.

Ever Slow Green tells the story of Auroville’s 50-years-young forest through some of the diverse characters who have dedicated their lives to bringing it to fruition.

Jury statement: “This film wins the Wisdom Award for its cinematic narration of how Auroville became a one-of-its-kind forest town in India. It journeys with a community of people who value, protect and nurture the diversity of Auroville’s natural and human environment. Soft light and music take the viewer through the forest cover of the land, water and people that form the essence of Aurovilian life. A labour of love!”

connect with EVER SLOW GREEN